Cybersecurity For Europe 2019, the first of three annual CyberSec4Europe consultation events, brought together significant European cybersecurity stakeholders including representatives of all four pilot projects in Toulouse from 13-15 November. Hosted by the Occitanie Region at the seat of the regional council of Occitanie, the three days of collaboration, conversation and networking featured high-level participants from industry, academia, government from across the European cybersecurity competence network. 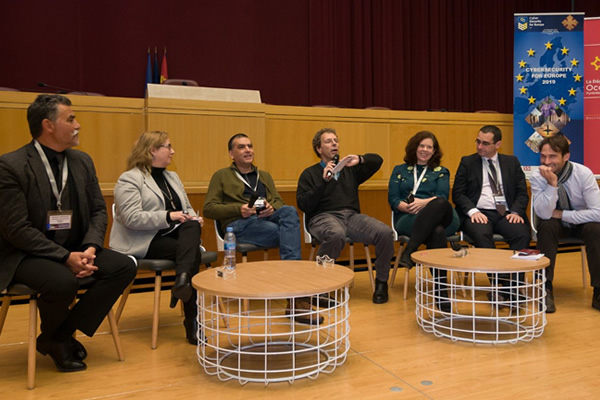 The event attracted around 150 participants comprising a comprehensive representation from the cybersecurity ecosystem and the stakeholder community, including but not limited to: the public sector (the European Commission, the Occitanie Region, and ENISA), the private sector (large companies, SMEs), the research and academic community (from all over Europe), and civil society (NGOs, citizens advocacy organisations).

The first day provided an overview of the symbiotic perspectives on cybersecurity from local, national and European-level government agencies, including Miguel González-Sancho from the European Commission’s DG CNECT and Luigi Rebuffi, Secretary General of ECSO, the European Cybersecuirty Organisation. The conference was formally launched in the early evening by Kai Rannenberg from Goethe University Frankfurt who is coordinator of CyberSec4Europe, who introduced Bertrand Monthubert, President of Occitanie Data, Renaud Vedell, from the French Ministry of the Interior and a video message from Mariya Gabriel, European Commissioner, Digital Economy and Society.

Delegates were then transported across town to a reception hosted by the OcSSimore association, where, after an introduction by Antoine Derain from Group BPCE who described the OcSSImore’s implementation of the decision-making processes and policies proposed by the governance model, they had the opportunity to meet the contributors to the construction of the Toulouse pilot regional hub of the future European network of cybersecurity competence centres.

The second day consisted of two sets of panels. The morning sessions focussed on policy matters, looking at recommendations for research and innovation in cybersecurity followed by a discussion on governance.  The afternoon sessions were more technical, examining first good practices associated with data sharing whilst handling different types of incident responses and then a panel addressing the broad subject of managing identities securely, from the perspectives of system protection as well as the preservation of individual privacy. After a recap session involving the moderators of the four panels, the conference attendees left to walk along the banks of the beautiful river Garonne to the Hotel Dieu Saint Jacques, a former hospital situated alongside the Pont Neuf, for dinner and some classic jazz.

The final day started with an inspirational keynote presentation from Pascal Andrei, the Chief Security Officer at Airbus in Toulouse, whose observations on the threat of cyber attacks, particularly to the supply chain, resonated with the audience. The panel on the future of European cybersecurity presented visions of the security implications of emerging technologies alongside some hard-hitting realities relating to European strategic autonomy in cybersecurity. The final panel reflected back to the beginning of the conference in a conversation between the representatives from the four pilots who were each asked how they envisaged furthering inter-pilot collaboration over the coming months and what they admired the most about each other’s project. At the conclusion of the three days, delegates came away, heads buzzing from what they’d heard and discussed and plenty of ideas for the next CyberSec4Europe concertation event in 2020!

Cybersecurity for Europe 2019 was organised locally by Université Paul Sabatier, and the Institut de Recherche en Informatique de Toulouse (IRIT), with the support of the Occitanie Region.