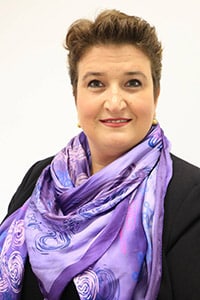 Tamara Tafra is Minister Counsellor for Cyber Issues, Hybrid Threats & Disinformation at the Permanent Representation of Croatia to the EU, where she has been working since 2013, covering COEST, COSCE and CYBER. She was chair of the horizontal working party on cyber issues during the Croatian presidency of the EU during 2020.

She started her career as a diplomat in 2004 and, between 2006 and 2010, she worked at the Embassy of the Republic of Croatia to Switzerland and Liechtenstein. She was also actively involved in the accession negotiations of Croatia to the EU as a coordinator for the Economic criteria and EMU.

Along with a university degree in economics from the Faculty of Economics and Business in Zagreb and a Master in European Studies from the Europa Kolleg in Hamburg, Tamarahas undergone several professional programmes in the German Bundestag (IPS programme), a training for diplomats of the German Federal Foreign Office, as well as the UN Academy and the Diplomatic Academy in Zagreb.